Originally published on genealogyatheart.blogspot.com on 18 Jun 2015.

My grandparents were able to blend their youthfully acquired Croatian culture with that of American (as in United States) society easily, or at least they made it seem easy.  I never thought much, while growing up, how difficult it had been for them to immigrate, as it must have been for all my other gateway ancestors, especially for those who did not speak English as a first language. I started thinking about these moves after recently helping my daughter relocate from West Virginia to Florida. For our daughter’s move, we rented a truck, hired 2 college kids to help load it, drove it 18 hours using gps and unloaded it with help from family. Not a fun drive but it was the cost effective.  Total time involved:  2 days.

Granted, as much as it is a pain to move today it’s certainly far easier than back in the day of our forefathers and mothers.

I wished I had asked my grandparents details about their move to the U.S.  Sadly, there is no living relative that would have that information as everyone in their generation and their children’s generation are all deceased.  I have several cousins and second cousins but I was the closest to my grandparents since I lived with them during my childhood and am the keeper of the family stories and records.  None of my cousins have any idea about the family’s migration.  All I know is that my grandmother emigrated with her younger brother, Joseph, and her mother, Anna, as her father, Joseph Sr. had come earlier to set up the household.  I would love to hear how the family traveled from a rural area outside of Zagreb, then in Austria-Hungary, to a port in Hamburg, Germany about 800 miles away. Sailing on the President Lincoln, the family arrived in New York where they were met by my great grandfather.  My grandmother had told me they stayed the night in a hotel in New York City but I have no idea its name or location.  The family went window shopping and my great grandmother fell in love with a lamp in a department store window.  My great grandfather told her it was too delicate to survive the trip but he would purchase one for her when they arrived in Chicago.  He kept his word and I have the lamp, it was passed from mother to daughter to grand daughter to great grand daughter and it will soon be given to 2nd great grand daughter. (Personally, I think it was first seen in Macy’s window as it was purchased from Marshall Fields which carried similar merchandise.  Makes me laugh thinking of my great grandma in her babushka being a Macy’s shopper in her youth!) Nothing from the Old Country, though, has been preserved so the only belongings brought over must have been clothing.  Being a family of pack rats, if any heirlooms had been transported they would have been cherished and displayed. Talk about a Fresh Start!

My husband’s family has been in the states for much longer than mine so it’s not surprising that there are no stories remembering his ancestors journeys.

His great grandfather, Anders Gustaf “Gust” Jonasson emigrated in 1882 from Byarum, Sweden with his wife Thilda “Anna Matilda” and 6 children.  The 8 of them packed all of their belongings into 3 trunks.  The largest is shown below: 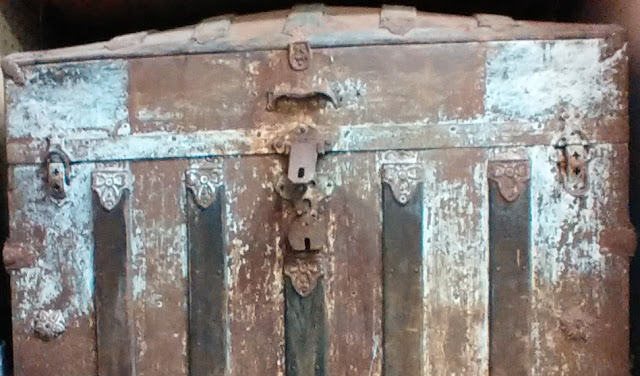 The other 2 trunks, about the size of today’s carry on bag, are in my sister-in-laws possession.  The trunks were stored in my in-laws basement in Miller, Indiana until the late 1970’s.  I had grand plans to restore the large one (the white area is where I started to clean the rust) but I never finished.  It’s still on my to-do list.

Now on the one hand, moving with so little is not such a bad thing.  Not a lot of time was involved in packing, transporting and unpacking.  Leaving behind cherished possessions along with family and friends, however, is a difficult concept for me to wrap my head around.  I’m so glad I don’t have to make that kind of move!