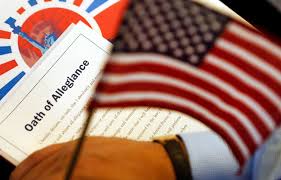 I’ve blogged before about the long wait for my grandparent’s US citizenship records that I requested last May and I finally received my grandfather’s on Monday. The best part was the Declaration of Intention which provided a picture of him at age 48. I have his engagement photo from 1916 and his marriage photo from 1917, a few in the 1920’s but none from about 1930 through 1950 so this was a real treat! He’s in a suit and tie looking quite dapper.
The biggest surprise was to see his signature. This is the only time I have ever seen his handwriting. By the time of my birth, my grandfather was legally blind so he never wrote anything.
There were a few errors in the document. The first was the spelling of my mom’s name. Instead of Dorothy she is recorded as Dorty. I laughed at that! My grandfather spoke perfect English but he had trouble with the th blend and pronounced it as tu. Reading my mom’s name reminded me that he used to call her Doro and if he had to say her real name, it did sound like Dorty. Her name was spelled correctly on the Petition for Naturalization.
My grandmother’s birth date was recorded as August 4th, 1901 and should have been July 18, 1900. I have no idea how the month, day and year were wrong on the Declaration of Intention. The month and day were right on the Petition but her birth year was 1903.
My grandparents were from the same village in Austria-Hungary and I never thought about how they knew each other from childhood. Being 8 years older, he had always known my grandmother and that was something I had to wrap my head around.
The document stated he was 5 foot 7 inches and that surprised me. In my head, he’s tall and I would have guessed 6 foot. Of course, I was small so that could explain a lot. My grandmother was barely 5 foot so he did seem to tower over her.
I never knew that my next door neighbor, Charles Bauer, was one of the witnesses. I loved Mr. Bauer – he always gave me money on Halloween, let me play with his dog and often inquired about how school was going. He swore he knew my grandfather since January 1, 1929. The other witness I had heard about but never knew, Rudolf Silich. The Silich’s had children that were the same age as my grandparent’s kids and lived across the alley from the family. They moved about the time of my birth and never returned to visit.
Still waiting for my grandmother’s information!