I read a wonderful guest post on MyHeritage that you must read – Do Genealogists Care About Family Artifacts? Of course, the answer is yes, however, life often gets in the way of the “saving.” 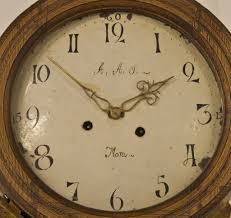 My town has a wonderful antique district and I’ve been on the hunt for a demilune since May. Hubby and I have many much loved furniture that once belonged to families other than our own. I’m lucky to have purchased my guest bedroom furniture from an elderly woman who couldn’t take it to the nursing home with her. I promised her I’d care for it when I bought it in 1985 after we lost everything in Hurricane Elena and I’ve kept my word. I blogged last spring about the china cabinet I purchased from Craig’s List. A blended family didn’t have room for two. I know the piece’s history and its travels across the country with a military family. They know they can visit it if they like (it was hard for them to sell it but it was degrading in the unairconditioned 100 year plus garage where they were storing it.)

Some furniture I don’t know its history but would love to. When we first married, I wanted a rocking chair and found one in the classified ads of our then local newspaper. It was smaller than I had envisioned but the price was right – $10.00. It was also hideous – someone had recovered it in green and white gingham with lace glued around the edges. I stripped off the covering and discovered it had been covered several times. Two layers down was horsehair stuffing. After quickly taking that outside I discovered that it was originally caned. I had the piece examined and it’s considered a sewing rocker from the 1840’s. I couldn’t find anyone who caned so I bought a how to book from a craft store and ordered caning material. I can’t say I did a great job but it’s held up for 39 years.

My most favorite piece, though, I rescued from the basement of a house my grandmother rented out when I was 4 years old. I guess my interest in history and saving artifacts started quite young! I can’t explain why I was drawn to it. An old oak chest, it’s top cracked and stained and a piece missing on the back to give it support, it was forlorn sitting abandoned in a dark corner. The drawer and two front doors on the front were hand carved. Someone had painted the inside brown. When the renters skipped we discovered it left behind. Inside was a chemistry book according to my mom as I couldn’t read. I pitched a fit that the chest be brought home. I’m talking a full blown temper tantrum that I still remember to this day. My mom and grandmom were not going to give in to my behavior but I was adamant I wasn’t leaving unless the chest went, too. My grandmother drove a Chevy Nova and it certainly wasn’t going to fit in there. My wonderful grandpa tied it on the roof and my grandparents kept it in their basement. I had told them I would keep my toys in it when I visited their house but they were soon to move to another. They moved that chest to the new house and then a year later, back to their old home. By then, my parents had separated and I truly did use the chest to store my games as I went to live with my grandparents. In the late 1960’s my mom got a brilliant idea to spray paint the chest gold and put it in our bathroom. When my mom and I relocated to Florida in the 1970’s my husband’s family, my then future in-laws, kept it in their basement. After we married and bought a house, we brought it “home.” My husband stripped off the gold and left it unfinished. I’ve moved it three time since and it still contains board games. I’m thinking of finally getting it professional refinished.

My solution to the situation noted in the blog I recommend you read is to put stickers on the bottom of pieces that are of family history so when my time comes, the emotional distress of my surviving family members won’t cloud the stories of where the object came from. That way, family pieces can remain in the family for the next generation. Times a wastin’ – make a note of what’s important to you this week!