Originally published on genealogyatheart.blogspot.com on 10 Sep 2016.

Recently I had the opportunity to research at the Daughter’s of the American Revolution (DAR) Library in Washington, DC.  I was attending an educational conference and at its conclusion, had an afternoon free so a colleague who is a DAR and I decided to join forces on a research trip.

Since we didn’t have much time we took a cab from our hotel.  There had been a wicked storm the prior evening so there were tree limbs littering the street and work crews trying to open closed roads. The taxi driver got us as close as possible due to this situation. 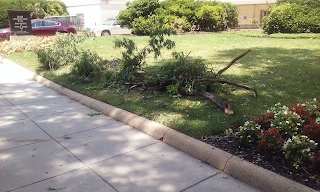 I had already checked out of the hotel so I had my suitcase with me when I arrived.  I know the DAR has gotten a lot of  flack over the years for some of their policies but I must say that these were the nicest people I had met in DC on this trip so far.  The guard said to put my suitcase in a corner and he’d watch it for me.  We got a visitor’s sticker and were directed to the library.

My colleague and I split up and I had two objectives; the first to find if John Duer was still open for new members and the second, what was the problem with Wilson Williams.  I always planned on joining the DAR when I retired and I didn’t want to submit paperwork on John Duer if the line was closed.  I was assured he was open.  My concern with Wilson was due to a family member who had decided to join the DAR but was told she couldn’t because of paperwork problems for Wilson.  I had helped with the research on Wilson and I wanted to know what was wrong.  Did someone find out, gasp, he had aided the Loyalists?  Was there another Wilson that we had mistakenly followed?

The Librarian checked and found no problem with Wilson.  He believed the family member misunderstood what she was told – there are too many people who joined DAR with the short form for Wilson and if she would like to become a member, she would have to complete a long form.  No worries there!

I headed for the stacks and found a few books that gave me some leads on my Thomas Duer connection.  I also checked out surnames for the Kinship Determination Paper I was submitting for certification just in case there was something somewhere I had missed.  Nope, had all of the derivatives and not surprisingly, no primary info to be found there.

After about an hour I texted my colleague who was wandering in the museum.  I joined her and loved the displays.  Reminded me of the historical museum in Morristown, New Jersey.

As we left she asked me if I had taken any photos of books with my phone.  “Yes,” I replied, “a few.”  I inquired as to why she asked.  Evidently, that was not permitted.  She had whipped out her phone to take a photo of a map and was informed by the Librarian that she owed $10.00.  She didn’t have a ten so she gave them a $20. and told them the rest was a donation.

She’s a much better person than me, for sure!  I would not have handled it like that.  I questioned her as to where there was a sign posted that photo’s weren’t permitted.  She said there hadn’t been any and that a patron overheard and also questioned the policy.  The Librarian responded that it had always been the policy.

When I came home I searched the DAR website and didn’t find anything regarding a no using your camera policy but be warned if you visit – your photo might cost you a whole lot more than a copy would!

Next time I’ll write about behind the scenes at the National Archives.