What a busy week it’s been for me! The Association of Professional Genealogists conference is wrapping up today. It was wonderful – timely topics, fun networking events, and it was great to see colleagues again. I highly recommend you attend next year if you are contemplating going Pro.

Today, however, I want to focus on an item I finally crossed off my bucket list. Last Sunday, I attended the Johnny Appleseed Festival in Fort Wayne, Indiana. It was on my to-attend list since I first learned about it years ago.

I fell in love with John Chapman, aka Johnny Appleseed, when my mom read me a library book about him when I was in pre-school. I don’t recall the title but I do recall one of the pictures. Granted, I now know the information wasn’t 100% factual but it did make a major impression on my young mind. I can still picture the book page depicting him in blue pants with ripped hems, suspenders, scraggly brown hair, tall and thin with forest animals following him as he threw apple seeds from a beige bag slung across his body.

I wanted to be him! How cool to be able to walk barefoot, plant seeds, and have all the animals be your friend!

Fast forward to 1985 when my father gave me a necklace that belonged to my grandmother and an old toolbox he had inherited from his father. He wanted me to pass them along to my children someday.  Inside the toolbox were newspaper clippings, undated and the paper unknown, mentioning a reunion for relatives of Johnny. Unfortunately, since I’m still unpacking, I can’t put my hands on it and I could have sworn I scanned it but I can’t locate that, either. Sigh.

The clipping intrigued me. Why would my father have saved it? Was he as enamored with Johnny as I was? I wasn’t close to my father so I had no idea. I should have asked but I didn’t.

In the late 1990s, after my father’s death, I linked up with a Leininger researcher who kindly sent me an electronic copy of two books he had written in the 1970s about the family. That’s where I discovered that Johnny was connected to me through marriage. The map above shows the location of Johnny’s farm.

Genetically, I’m not related to Johnny. When Johnny was in the area, he stayed with Percis, as Elizabeth fondly recalled as an adult. In his older years, he visited Elizabeth and her family, as her children remembered.

I always wanted to grow an apple tree but Florida is the only state where apple trees won’t grow. I tried, however! I once brought back seeds from a wild apple tree growing in a Pennsylvania cemetery where my husband’s Harbaughs were buried. A cemetery caretaker claimed the tree was the remnants of one of Johnny’s orchards which he had scattered throughout the then wilderness. I did get the seeds to sprout by placing them in a wet paper towel, inserted into a baggy, and kept in the fridge. As soon as I planted them in the dirt in a Solo cup, however, they shriveled and died. Now that I’m in Indiana I will definitely plant that tree! I won’t be using one of Johnny’s, though, as his trees produced fruit best for hard cider which was medicinal for the pioneers. I’m leaning towards Albermarle-pippin, a favorite of Ben Franklin, Queen Victoria, George Washington, and Thomas Jefferson. I plan on visiting a local orchard this week to get details on when I should be planting. A neighbor told me it’s best to plant fruit trees here in months that end in “R.” I love hearing these old ways to successfully garden. So much of that knowledge has been lost. I wish there were a book about farmer wisdom from days gone by.

But back to the festival – It was a beautiful warm late summer day in Archer Park, on the bank of the St. Joe River. It is the final resting place of Johnny who is buried on the top of a hill. So many vendors were selling homemade craft items, antiques, produce, and food typical of pioneer life. My hubby said this was his favorite festival he ever attended. Since much of the food was made on site, the smell of the campfires filled the air. Craftspeople demonstrated their skills in metalworking, sewing, photography, etc. They were so knowledgeable and I learned so much.

My favorite part was the cannon salute that opened the day. It was in commemoration of the opening of the Wabash and Erie Canal in 1832. Theabald and John George, along with their parents and some siblings, emigrated from Alsace-Lorraine to Ohio in 1827 via a canal to Canton, Ohio. That was likely the Ohio and Erie Canal. It reminded me of how important water travel was back in the day.

History, genealogy, and the festival were intertwined for me which made it so memorable.

October is around the corner and I’ll be writing my annual coincidence blogs. I’ve had some really weird things happen in the past few months that I’ll be sharing. See you next weekend!

Originally published on genealogyatheart.blogspot.com on 16 Oct 2015. 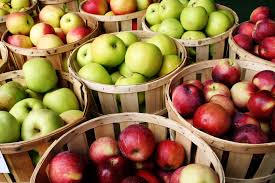 When I think of fall I don’t think about pumpkins and leaves like most.  Instead, I think of apples.  I loved apple picking as a child and I knew what would come soon after, my grandma’s apple strudel. We bobbed them, tried to bite chunks out that were dangling from the ceiling and dunked them in caramel.  My neighbor, Carol, and I would twist the core while reciting the alphabet to determine the initials of who we would marry someday. Sweet or tart, there’s an apple for every one’s taste.

When my in-laws moved to a rural part of northeastern Indiana in the 1980’s, hubby and I always knew where to turn on the unmarked road – just look for the old abandoned apple orchard on the corner.  The trees were gnarly and the fruit small and withered.  It always looked creepy to me, even on a bright sunny summertime day.  I remarked to my father-in-law that it was a shame the trees were neglected.  He said that he had heard that they were once owned by Johnny Appleseed.  Little did I know how right he was.

I knew Johnny Appleseed was a real person named John Chapman.  With a romantic notion of him traveling the west to plant apple seedlings so that pioneers could benefit from the delicious fruit on their journey, I knew little else about him.

I passed on the story of Johnny Appleseed to my children every fall when I made my mother’s apple salad. They wanted us to plant an apple tree but in our part of Florida, that wouldn’t work.

Imagine my surprise when I discovered this newspaper clipping with my father’s papers after his death in the late 1990’s: 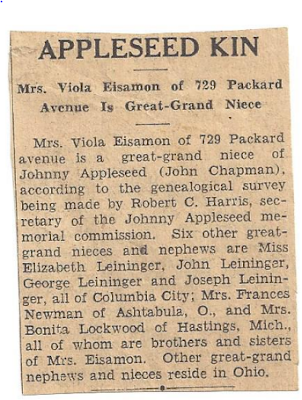 Like most everything my family has left me, I have no idea of the source.  Grrr-no newspaper name or date. Did Dad save it because the name Leininger was mentioned or was he, too, related somehow to Johnny Appleseed?  Dad and I weren’t close but there was an apple tree on my grandparent’s farm in Hobart, Indiana that I used to climb.  Wouldn’t someone have told me if Johnny Appleseed was a relation?

John and George Leininger are common names in the family – I’ve got 19 John’s and 18 George’s. In addition, I’ve got combined John George and George John.  I knew John Chapman never married and I had no Chapman’s in my tree so I assumed the clipping was because of seeing the Leininger name. Yet, there was some other oddities that made me wonder.  My step-grandmother was from Michigan, close to Hastings, and the Leininger family first settled in Ohio, though it was not Ashtabula.  My aunt’s name was Bonita and she once lived near Columbia City, Indiana.  Hmmm.

It wasn’t until a distant cousin emailed me his Leininger records that I learned that John Chapman was involved with the Leininger family and that spooky old orchard did in fact once belong to him.

“According to a deed signed by President Martin Van Buren, John Chapman owned 74.04 acres in the South 1/2 of the N.W. 1/4 Sec. 3 Twp 24 Range 15.  The deed was dated March 11, 1836. This land is located in the far northeast corner of Jay County, on the Wabash River.  It was on this land that he planted a nursery of appletree seedlings…. John Leininger purchased through a deed, entered July 1, 1839, 128.60 acres of the S.E. fraction of Sec. 15 of the same township. This land was located about two miles south of Chapman’s land.  John Leininger also purchased eight acres of land in Mercer Co., Ohio, on the other side of the State Line from his larger purchase.  He built his house and buildings on the eight acres, so that he could send his children to Ohio schools, which were better at the time than Indiana’s.  Please realize that this area was practically wilderness at this time.”1  My dear readers know I’ve written earlier about my family’s interesting ways to get their children into the best school districts – see blog of 20 August 2015 Education Across State Lines.

John George and Elizabeth had 6 children before her death.  He remarried to Sarah Hough in 1864

and had 5 more children.  John George is my 2nd great uncle, sibling to my 2nd great grandfather Jacob Leininger.

I’ve written about John George in a previous blog (see 26 June 2015 Planes, Trains, Automobiles & Barges, Oh My!) and how difficult it must have been for my 3rd great grandmother, Marie Gasse Leininger, to have to journey to America with young children.

According to family recollections, Johnny Appleseed lived with Percis and William when he came back to Indiana.  William tended Johnny’s land in his absence and when Johnny died in 1845, Percis inherited Johnny’s 1200 acre nursery.2  Johnny was a wealthy man at the time of his death.

I don’t know what religion Percis and William followed but their daughter, Elizabeth, married into a Lutheran family.  Johnny, however, followed the tenets of theologian Emmanuel Swedenborg.  At the end of his days, Johnny was a barefoot vegetarian who preferred to treat everyone and everything with respect.  Since that included Native Americans, animals and insects, Johnny was viewed as eccentric.

Here’s some things I bet you didn’t know about Johnny:

So the real Johnny would have fit right in the 1960’s as a hippie type that would have approved of Boone’s Farm Apple Wine with his special herb mixture.

Oh, and that newspaper article – seems that it was from the Ft. Wayne, Indiana newspaper around 1931 when Robert Harris was interested in finding descendants.  So it wasn’t cut out by my dad after all.  Most likely either my grandmother or grandfather clipped the article as that is where they were living at the time. Robert Harris published a book in 1946 about Johnny.

One more mystery remains – that apple tree I used to climb on the family farm.  I wonder if it was one of Johnny’s.  We couldn’t eat the fruit as my mom said it was “bad” and my grandparents were from the Ft. Wayne area so it just might have been one of Johnny’s.  Too bad we’ll never know.  The farm is now a subdivision and the apple tree was cut down in the