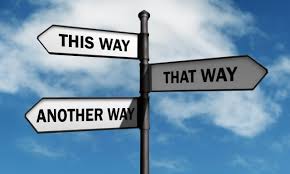 Last week when I was in Santa Fe, New Mexico and had a dickens of a time locating the Oldest House that I blogged about on Tuesday. According to the map and online guides, the Oldest House was said to be NEXT TO the Church. All I saw next to the Church was a pizza restaurant.

The church was locked so I tried to follow the sign on the government building next door that said “Visitor Info.” The sign had an arrow directing visitors to enter on the east or south entrance. I walked down the street in the direction the sign had pointed. There was no entrance on the street side so I suppose it was the north or west side. I turned at the intersection and again saw no entrance. Okay, I was certain to find the way in when I reached the back. I walked the entire length of the back side and still found no entrance. Turning left, I finally located the door. So what the sign meant was that there was one entrance and it was on the south east side.

I asked the attendant for directions to the Oldest Home. She said, “It’s BETWEEN the church and the restaurant.” I mentioned that a street was between the restaurant and the church. She insisted the home was BETWEEN and told me to look again.

If I was to describe where the house was located, I would say it was BEHIND the restaurant and ACROSS the street from the church. This reminds me how careful we must be when we’re reading old deeds.

My people are famous for recording deeds noting boundaries of big rocks and tree stumps. I now wonder how many noted BETWEEN when I would have considered it BEHIND or south and east as southeast? 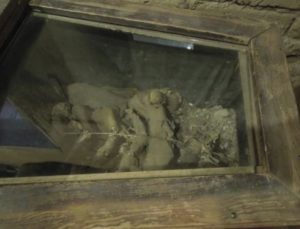 I love family legends even if they are tall tales. Last week I trekked to New Mexico, where I have no family ties, and learned of a passed down legend that was quite interesting. While visiting the Oldest House in Santa Fe, I heard the story of two elderly Native Americans who once lived in the dwelling. Supposedly, they had made a love potion for a Spanish soldier, Juan Espinoza, and when it didn’t give him the results he had wanted as his love had married another, he returned to seek his money back. An argument ensued, he fell and was beheaded. The ancient wooden casket in the home supposedly contains his body; over the years a plaster cast was enclosed to represent his missing head.

The next evening, on a ghost tour, the guide told his version of the story. He believed the women were sisters and these witches had been threatened by the soldier. As the soldier attacked one of the women, the other took out a saber and sliced off his head. The women then dragged his body outside and left it. No one knows where the head went. The soldier’s ghost reportedly roams looking for his head. The sister’s punishment was to keep the coffin in their home.

Two days later I was in Taos at the Pueblo village and my tour guide there told the same tale with a slightly different twist. The two women were not elderly and were local healers specializing in matchmaking. The soldier was inpatient and violent when his request for a wife wasn’t fulfilled quickly. The townspeople misunderstood the situation; it was clearly self defense on the part of the sisters.

When I returned home I looked online and found many other versions of the tale. Some say Juan was shot in the leg by the women who later cut his head off. Others say he fell on his saber and cut his own head off.

And like the various versions, there’s no agreement on when the death occurred. According to the Taos guide, the event happened before the Pueblo Revolt of1680. Information at the house states that there was a dwelling on the premises for at least 800 years. The website states that there is no deed record but analysis of lumber used in the building construction was from 1740-1767.

Since none of us were there we will never know what really happened. Unfortunately, no records remain of the event so the passed down stories are the closest we’ll ever get.

If you have a tall tale passed down in your family, get as many versions as you can and record them . Then, search historical records to narrow down the “facts.” For example, it is most unlikely that the event in Santa Fe occurred before 1692. Why? The house was used during the Pueblo Revolt in 1680 to fire upon the Oldest Church across the street. The area was resettled after 1692. It would be unlikely that the Native Americans residing in the Santa Fe between 1680-1692 would leave the coffin in the home; that punishment by the Spanish would have been rid of quickly after they succeeded in retaking their ancestral land. This helps us narrow the story to between 1692-1836 when the area parted from Mexico. The house was remodeled many times over the years so there is no telling if the event occurred prior to the new beams being installed in the mid 18th century or after. I personally think the coffin was added by later owners who wanted an interesting tourist attraction. I find it hard to believe that the coffin would remain in the home after the Native American women’s death.

Next time I’ll blog about other genealogical gems I uncovered on my trip.