You may have tried the new MyHeritage tool that allows you to upload a black and white photo that will be transformed into color.  I spoke with a colleague at a genealogy conference last month who gushed about the magic of the results.

I finally got around to trying it and decided the true test would be with one of the photos in my collection that were of a known relative so I could compare results with memory.

I selected a photo of my great grandmother, Anna Grdenic Kos[s]:

I recall this photo was taken Christmas 1961 or 1962.  I remember the dress and that my grandmother, Mary Violet Kos Koss, purchased the corsage and it was worn to the church service.  I even recall where they attended, St. Joseph’s Croatian [Roman] Catholic Church in Glen Park, Gary, Lake, Indiana.  I didn’t go with them because the mass was in Croatian; instead, my mother and I walked a block to attend services at St. Mark’s [Roman] Catholic Church.

This was not my great grandmother’s skin tone in winter; she was quiet pale. Actually, it wasn’t even her tone in the summer as she didn’t go out in the sun.  The dress was green and white.  The corsage was silver with red balls and a green ribbon.  I know this because I was there.  I also played with the corsage and tried to affix it to my cat’s collar after the holidays.  I thought that corsage was just awesome!

So, if you’d like to colorize your photos you can do so at MyHeritage.  You can sign in through Google or Facebook and if you have a MyHeritage account, just enter your password.  Then, just drop and drag the photo you’d like colorized in the box.  It just takes a few seconds to get the finished image.

Know that MyHeritage retains the rights to the photo.  Know, from my personal experience, the colors you get aren’t necessary true.  Personally, I like my black and whites and sepias.

Originally published on genealogyatheart.blogspot.com on 5 Oct 2016.

I’ve been on a technology kick lately and here’s why – I did something incredibly dumb and I don’t want you to do it!

We have a nice older digital camera that we rarely use.  I rely on my phone for pictures of events and when I research as I prefer the document to be digitally available instead of having to lug the book to the copy machine, pay, and come home with yet another piece of paper that I have to then scan to save.

Yes, the camera phone has made my life better but I had taken so many pictures in the past two years that it stopped uploading about 45 photos ago.  Now I knew this because I kept getting a warning that I was out of space but it was one of those things I put off correcting.  I decided I wasn’t going to buy more space because I really needed to get into the habit of cleaning out the photos shortly after I’d taken them.

We were going to have an event at my primary job that involved taking lots and lots of photos over a short period of time.  Charged the camera and put in a new SD card but I wanted a backup in case the old camera failed.  I started going through the phone photos and hitting delete one by one.  I guess I got a little over enthusiastic (actually, I got distracted by a phone call on the land line) and must have hit something wrong as I deleted everything at once.  Oops!

I know what I lost and most are thankfully, somewhere else.  I lost a picture of my son petting an armadillo he had rescued out of our hot tub last summer.  The armadillo was making eye contact with him and looked like he was eternally grateful for being saved.  I texted the pic to my daughter who promptly replied son better wash his hands as to not get a disease.  So I have that picture in my texts.

I lost a picture of a peregrine falcon that landed on my fence during the hurricane but that’s okay, too, as he now lives in my hood so if I want, I can retake his photo.

What I’m upset about is birthday photos of my husband for the last two years.  I don’t post to Facebook and I wouldn’t have texted them because everyone who cared was here.  I know I was the only one taking photos so they’re gone for good.  Hubby could care less but I’m kicking myself for being a goof.

Hard way to learn my lesson but I think I won’t be repeating this mistake.

Originally published on genealogyatheart.blogspot.com on 16 Jun 2016.

I’ve had a very strange week – genealogywise!  It started with this recent family photo tree purchase: 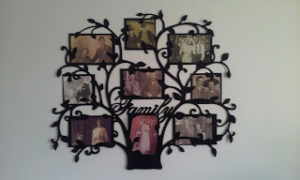 I always wanted to place family photos on the wall in my office but I couldn’t decide which pictures to use or how to group them.  I saw the photo tree concept online but the reviews weren’t good; some said it was difficult to put together and others complained it wouldn’t stay up on the wall.  The trees were pricy, too, and I didn’t want to waste time and money on a product that would frustrate me.

A few weeks ago I found the tree pictured above offered through Books R Fun locally.  The reasonable price and the easy directions worked for me!  Within minutes I had the tree up and then it hit me – why not use couple photos.  I could display more people that way and since my husband and I share an office, it would serve as a nice reminder of our many grandparents.

I didn’t think it was going to take me long to finish the project as I sort of knew which photos I would select.  First problem I encountered was my photos were missing from Google Photos.  I’ve blogged previously about how Google Picassa has morphed into Google Photos and I thought that I had successfully transferred all of them from one program to the other a few months ago.  Evidently, most did not take.  Please check if you did that, too, as it’s better to know now then when you need them.

No worries, I thought, I have them saved elsewhere.  That’s when I realized the computer where I had saved them had bit the dust.  I checked Dropbox; they weren’t there, either.  I must have removed them when I reached the max allowable on my plan.  They were on Ancestry.com but to have to go through the gallery to locate them would be time consuming.  I have backups on cd but those were saved by family surnames and I would have had to keep flipping through the various cds to find what I wanted.  I then remembered that I had installed Picassa on the desktop of an old laptop.  Sure enough, there they all were!  Since I had taken the time to place all the photos in albums it was a breeze to find what I was looking for quickly.  I’m glad this happened now as I have since backed up the laptop pictures to 2 hard drives and again, to Google Photos.  The $8.00 tree purchase saved me future grief!

Being a thrifty genealogist, I decided I wouldn’t print the photos to photographic paper until I had them perfect as most of the photos I selected didn’t fit easily into the frame size.  I plan to make them real photos this weekend and add children of the couples to frames that will surround the tree.

As I was arranging and rearranging the photos on the tree itself I was startled to discover how much of a strong family resemblance my father-in-law had to his mother and grandmother!  My husband bears a remarkable resemblance to his maternal grandfather who he never knew.  I have seen these photos for most of my adult life; none were new to me.  It wasn’t until I placed them in the tree that I noticed the similarities between individuals.

I’m not sure if it was because they were now almost all the same size, shape, and color, the angle on the wall or the proximity to each other.  Looking at them from this perspective was nothing short of startling. I highly recommend trying this!  You may discover things about your family in a completely different way.

When I looked at myself, however, I was stunned.  I don’t look like anyone!  I blurted out that I must have been adopted but hubby pointed out that I have the original birth certificate and that there are photos of me in my mother’s arms in the hospital shortly after I was born.  Mom clearly looked like she had been through labor!  I knew I had my mom’s eyes and figured my hair was just a blend of both of my parents – my dad’s blonde and my mom’s dark brown.  Looking at the photos I realized I had my paternal grandmother’s hair, my maternal grandmother and great grandmother’s nose and my paternal grandfather’s chin.  Okay, so my dna is all mixed up – I am a true red blooded American mutt!

The photos didn’t just unveil family similarities; they also showed up some commonalities uniting all sides.  I always thought my preference for pearls was a result of watching Leave It To Beaver as a child and channeling June Cleaver!  Nope, in just about every photo a female is wearing pearls.  I shared this insight with my daughter who just happened to be wearing pearls.  Nice to know that trait got passed along to another generation.

I also discovered that one of the great great grandpas was wearing some type of insignia.  I never noticed it before and it’s another mystery to solve.  Taking a look back at your old photos may just lead you to more amazing family discoveries.

Originally published on genealogyatheart.blogspot.com on 18 Feb 2016.

Ever long for a picture of your great great grandparents?  You’ve dug through your grandparents attic, asked your great aunts and uncles, scowered the internet and came up with nothing!  Frustrating, certainly, but where there’s a will, there’s a way.

I was able to find a picture this week by simply contacting the church that was named in the ancestor’s obituary and asking if they had a record of her.  Within 3 days I had received a note from the pastor who had asked the church historian to scan a copy of the couple’s church registration card and several group photos for church organizations the wife had been a member of.  How cool is that!

I had the obituary for some time and just rereading it sent off a light bulb to see if the church where she was a member for 60 years was still in existence.  I wasn’t counting on a response, as you know from previous blogs, I’ve been unsuccessful before with obtaining church records but this time was different.

Now that I know what she looks like I’m looking through old family photos that I have with many unidentified people as I suspect she is in there.  That may lead me to a picture of her husband who was camera shy at church!