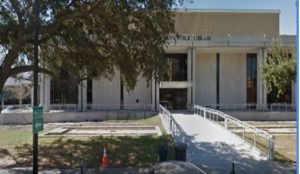 The John F. Germany Public Library in Tampa, Florida holds one of the largest genealogical collections in the southeast United States. I visit often and have always found the staff to be professional and helpful. Last month, my visit there saddened me.

I planned to drop off some donated books and as it was thundering, decided to park in the adjoining parking garage. It was mid-day and the lot was just about filled. I thought I was lucky to find one of the few remaining spots on the top floor. I took the elevator to the tube that joins the garage with the library. When I approached the library doors I was shocked to find them boarded up. I guessed that the facility was being renovated. I walked a level down and then half way around the block to enter from the front. Stopping at the information desk, I asked for the acquisition clerk who was expecting me. “I’ll have to take you up because the elevator needs a key for that floor,” was the response. I thought that was odd but with security as it is these days, I wasn’t too surprised.

Evidently, in June, with little notice, the City of Tampa who owned the annex decided that the library must vacate the building. The Genealogy Department was relocated to smaller quarters on the 4th floor of the main building. That floor once held the Administration Department which is why the elevator only stopped there with a special access key.

I understand progress but I’m dismayed that the City decided to relocate this genealogical gem because THEY’RE SELLING THE PROPERTY TO BUILD APARTMENTS. Now if housing was in such a shortage in the Tampa Bay area I could perhaps see the reasoning for the decision but as it is, there is much vacant land adjacent to downtown Tampa just a few blocks away that can be used for apartments. In the past few years, the City has relocated thousands of people as they’ve emptied out public housing high rises. They haven’t even demolished many of those vacant structures that are to be rebuilt for mixed usage someday.

Obviously, the City’s priorities are not the same as mine. Progress is important but not at the expense of the past. The library staff has done a wonderful job on short notice to accommodate the space shortage. Kudos to the library staff; Shame on the City of Tampa’s decision.