It’s been a slow week genealogywise for me as I’ve been consumed with the house renovations and an increased workload at my educator job. I thought I’d have difficulty coming up with a blog but instead I’m bursting with lessons learned from those situations that apply to genealogy.

With renovations, there is a lot of moving of “stuff” around as we empty one area of the house with the goal of making it an improved place. It’s a total pain to have to physically move items. I also realized I have a lot of things that I no longer use so I’m donating or pitching as I go (or pawning off on my children). This got me thinking about genealogy practices…

I used to have alot of stuff I took with me when I researched; I carried my clunky laptop, notebook, charts, lots of pencils, a camera, phone, stickees, and thumbdrives. It was a workout just getting into an archive. I’ve streamlined considerably and find I can simply take my Kindle, phone, a mechanical pencil and stickees. Instead of many thumbdrives that contained my surname info and individual thumbdrives for my clients, I now just take one for microfilms in case I can’t email it to myself and use the ap on my phone, Office Lens, to take a picture and immediately send it to One Note, for everything else I used to save to a thumbdrive. I can view that from my phone and Kindle to make sure it looked the way I want before I leave so I never get home and realize I needed to get a better view. Also on the Kindle is Evernote, which has my research log template. I still carry the stickees to flag book pages I’m interested in. These changes have made my research life much saner and safer. I don’t have to worry about someone walking off with the laptop if I have to go back to the stacks for another look. I have more flexibility in where I park myself down to research and I lost weight without having to diet. Very cool! Have no idea why it took me so long to figure out I needed to do this room by room in my house.

After a room is finished I find that I might be better off moving items around for increased efficiency. For example, my drinking glasses used to be in a cabinet closest to the sink. I realized it’s a better idea to move them in the cabinet next to the refrigerator as that’s where we go to get cold, purified water, ice and lemon. This practice definitely applies to genealogy. Just because you used to do something doesn’t mean you should continue to do so. Back in the day, I organized my genealogy files by lines. As the data grew I found that it was too complex so I took the time to reorganize by surname. A binder system works well for me today but may not in the future and that’s ok! Change is good although I must admit, as a creature of habit, I do tend to go back to the old cabinet to seek out a glass when I’m exhausted. Habits may be difficult to break but can be done. Investing time to make a task better is time well spent. You may be in for a happy surprise, which gets me to my next lesson learned.

Ironically, last Wednesday I blogged about my recent Dropbox experience. At my educator job, a decision was made right after I wrote the article that our team was going to only use One Note. I spent all day Thursday and part of Friday dropping and dragging files from Dropbox to One Note. Although I wasn’t thrilled to have to readjust my work priorities during a busy time, the situation did give me a big Ahaa! In Dropbox, I saved by event but in One Note, the decision was to save by date. Same situation as moving my drinking glasses and reorganizing my genealogy files! The data is the same but where and how it’s stored is different. So here’s where I learned another lesson – looking at the older files was quite enlightening. I was able to identify some holes in our program which we’ll be discussing this week. Try this with your brickwalls. If your found records are in timeline order, shuffle them up and place them by type of record or location where they were made. You might identify where your gap is and be off and running to locate overlooked events or places where they occurred. It sure is the same stuff but my looking through a different lens you might make a new discovery.

In other words, you’ve got to change your practices up to move forward, even if it’s painful. Happy Hunting! 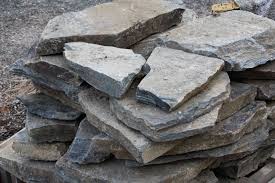 Sometimes in genealogy we get so consumed with the names, places, and dates of our ancestors that we overlook the details that tell us much about their character.

The cemetery records transcribed by Josephine Frost from an earlier book by Henry Onderdonk broke through a 16 year genealogical brick wall and gave insight on the spiritual beliefs of the Wilson Williams Family:

The obvious information provided by these records are the name of the deceased, month and year of death, age at death and type of grave marker. For Margaret, her spouse’s name is also provided.  F.W. most likely is a mistranscription of Wilson’s father, Thomas Williams.

There is much more information provided that isn’t initially obvious, however. The first hint is the mention of a common field stone.  Onderdonk and DeHart (1884) tell us that the Dutch Reformed denomination custom “In early times farmers often interred their dead on their farms and put up at their graves a rough flat stone with the initial of the name, and year of decease rudely cut thereon.”2  From the record we know that Wilson and F.W. are following the Dutch Reformed tradition of burial.

But what about wife Margaret?  There is no mention of a common field stone marker for her.

To locate picture of the markers, death dates were inputted into Find-a-Grave. No record for F.W, W.W., Thomas or Wilson Williams was found.  The common field stone markers may be missing or may have been missed by the volunteers who photographed the cemetery.  There is a record for Margaret Williams; she is noted to be buried in Christ Church Cemetery, Manhasset, Nassau, New York3. : 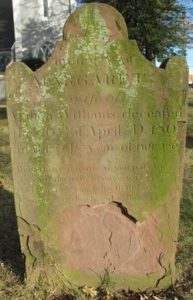 We know this is our Margaret because the death date, spouse’s name and her name match the church burial record of Frost’s transcription.

Margaret’s headstone reveals that she did not follow the field stone custom as did her husband.  Margaret also did not follow what Walter (1987) notes is “the traditional Dutch practice of the wife retaining her maiden name” on her marker.4

A more careful examination of Margaret’s tombstone will give a better insight of her belief system.

Margaret’s stone is worn so a transcription is needed.  Enlarging the picture uncovers:

In Memory of Margaret

In the 64th year of her age

Behold my friends, as you pass by

As you are now so once was I

As I am now you soon shall be

By researching the poem more knowledge about Margaret becomes available. With some variation in the third line, the poem was commonly used in colonial times.5  Meyer (2006) noted that the poem was “Influenced by the ‘British pre-Romantic graveyard school’ of poetry” and the ‘Americanized Puritan mind-set’.”6 He cites George and Nelson (1985) who identify it as a “mori gravestone epitaph found throughout New England” between the 16th-17th century.7

Wilson and Margaret lived between 1754-1831.  Margaret was born, lived and died in Long Island, New York and there is no record that she ever ventured to nearby New England.  The use of a common New England epitaph tells us that:

History tells us that Long Island was populated by former New England colonists and during the Revolutionary War, some Long Islanders fled back to New England for safety.  Thus, New England’s influence could result from either Margaret’s childhood or later, during her adult years.  Only further research of Margaret’s parents can determine when the origination of her spiritual influence occurred.

The poem, however, does provide us more insight into Margaret’s belief system at the end of her life.  It is considered to be memento mori, Latin for “remember, that you have to die,” a Medieval theory that the Puritan community espoused.8

We know from Frost (1941) that at the time of Margaret and Wilson’s burial, Christ Church Cemetery belonged to the Reformed Dutch Church.9 Today, the cemetery belongs to the Episcopalian Church. 10  Is there a relationship between these denominations?

Boettner (1932) notes that “it is estimated that of the 3,000,000 Americans at the time of the American Revolution, 900,000 were of Scotch or Scotch-Irish origin, 600,000 were Puritan English, and 400,000 were German or Dutch Reformed.  In addition to this the Episcopalian’s had a Calvinistic confession in their Thirty-nine Articles…”.11  The interrelationship is explained further by Monsma (1919) “The Pilgrims were perfectly at one with the Reformed (Calvinistic) churches in the Netherlands and elsewhere.  In his Apology, published in 1619, one year before the Pilgrims left Holland, Robinson wrote in a most solemn way, ‘We do profess before God and men that such is our accord, in case of religion, with the Dutch Reformed Churches, as that we are ready to subscribe to all and every article of faith in the same Church, as they are laid down in the Harmony of Confessions of Faith, published in that name.”12 Clearly, the Puritan English, Dutch Reformed and Episcopalians have a shared history.

“You never really understand a person

until you consider things from his point of view” –Harper Lee

What were Margaret’s spiritual beliefs?  Although we may never know for certain, based on the selection of the epitaph, Broker (2003)13 cites Stannard (1977), “the Puritan worldview included the following beliefs:

There is one piece of evidence that is atypical, however, for both Puritan and Reformed Dutch believers at the time the marker was made.  Margaret’s stone has NO artwork.  Shortly after the Revolutionary War, stone cutters from Great Britain arrived in the New York area.  The most typical motif for the Dutch Reformed in New Jersey was a tulip, shell, or fan; in Long Island, as in New England, urns and willows became dominant over the cherub or winged skeleton found on grave stones from the pre Revolutionary times.15

Why Margaret has no artistic design on her marker remains a mystery. Perhaps it was Wilson’s decision to keep the marker plain as was his own marker years later or maybe Margaret adhered to the earliest Puritan custom of no artwork. Without family records we can only surmise.

Analyzing death records and grave markers can provide the researcher with more than just vital statistics.  Careful study can unlock further clues about the family’s convictions.  Euripides was certainly right!

Your comments are most welcome.  Next time I’ll take a break from the scholarly and give you IMHO the ins and outs of visiting the Family