Did you know that August is Make-A-Will month?!  I had no idea until I received spam this morning that it was time for me to make a will. I checked it out and sure enough, this is the month to complete this important but disdained task.

Funny how as family historians/genealogists we LOVE wills and probate but personally, not so much.

Earlier this week I was volunteering at my local hospital when I overheard a family discussing a terminal family member.  The individual hadn’t yet died but the family members present, 2 grandchildren and 3 siblings of the patient, were in a discussion over who was going to get what after the death.  I tried really hard to ignore the conversation as it was not only none of my business, it was disheartening.

Personally, hubby and I have experienced family issues after a loved one’s death.  It is not pretty and can destroy relationships.  These events happened even though there was a will in most cases.

Although I still miss my mom who passed in 2001, I was fortunate that she had planned well for her final days.  When she was first diagnosed with Alzheimers, she asked me to attend a meeting she had scheduled regarding disposition of her remains as she wanted to be cremated.  She had previously made a will.  The only problem was she couldn’t decide where the cremains would be housed.  I never got an answer so my husband and I decided to inter them in the family plot where she grew up and where her parents and grandparents were buried.

Several years ago, I convinced hubby we needed to make our final arrangements to spare our adult kids the task.  We updated our wills and added a Living Will, Power of Attorney, and Designated Health Care Surrogates.  The kids each received a copy.  We had both children notarize the form regarding our body’s donation to science.  We purchased a space in our city cemetery and selected a funeral home that will receive our cremains once medical school students are done with them.  The funeral home has our obits.  We placed our children’s names on our property and bank accounts so that they can close out any debts or make needed repairs seamlessly.

To avoid the scenario that I overheard at the hospital, I have placed stickers on the bottom of several items that have been in the family for years and I want passed down to the next generation.  The labels state who was the original owner of the item.  I don’t care which of my children get what items and there isn’t a lot to fight over.  Unlabeled items they can keep, sell or donate.

The death of a loved one is never easy.  The lack of a will makes the situation even more difficult. Make time to make your final arrangements soon.  You’re not only helping your closest family members, generations to come will discover your will and thank you for that. 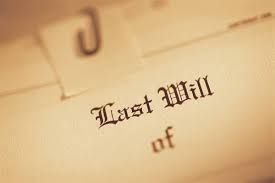 Genealogists need to take a tip from Santa Claus – we should be “making a list and checking it twice!” No, not to find out who’s naughty or nice, although that does make family history interesting and more entertaining to pass on to relatives. The list making and checking is critical, especially when you acquire information from someone else. Here’s what recently happened to me…
Through this blog, I made contact with a second cousin I had never met. He put me in contact with several other cousins and we all shared info on a brick wall ancestor to see if putting our heads together could resolve the dead end.
Three of us live far away from where the ancestor had resided; one of us lives within reasonable driving distance. That individual had gone to the courthouse and pulled the probate records years ago. As I reviewed the paperwork making a list of all that we had discovered, it struck me that our common ancestor would have been left an orphan. I decided to go on FamilySearch.org to see if records were available for the area as the driving distance cousin, with family commitments and the approaching holidays, couldn’t find the time to make another visit.
I must have been a good genealogist this year as oh, what a wonderful early present I found! The probate file was now online and contained the guardianship information. The file was 40 pages – the cousin had only 3 pages. I’m not sure if the courthouse employee only copied the last 3 pages or my cousin only had cash for those pages but the entire packet was a gem for me because I discovered my 3rd great grandfather in another line was the appraiser. His signature was all over the documents.
Lesson learned – ALWAYS go back to the source to see if the information is accurate and complete. By my making a list of what records we had found, I was able to identify other places to check. We haven’t climbed over that brick wall yet but we’re getting closer!
Have a wonderful holiday – I’ll be writing again after New Year’s Day.

Originally published on genealogyatheart.blogspot.com on 3 Aug 2016.

Last blog I mentioned two rules I use to make a research trip rewarding – KNOW BEFORE YOU GO and PACK EFFICIENTLY.  Just back from researching in several states and in various libraries and archives so I’m going to share what worked for me at the different locations I visited.

My first stop in Pennsylvania was the Chambersburg (Franklin County seat) Courthouse.  I had called ahead to verify the times the facility was open and that the old deeds and wills I needed were available.  I knew the cost of the copies and how they accepted payment (cash/credit/debit).  I knew which building (there’s an old and new courthouse) and what department and the floor I needed to go to.  I also asked where I should park.  This allowed me to save time and money when I arrived.

I had also previously identified what the deed dates I was interested in finding by using an index on Familysearch.org.  I had ordered the film for the actual deeds but when it arrived in June, it didn’t contain them.  Sometimes the films are mislabeled and you don’t get what you expect.  One of the films did have a deed but it was of such poor quality I couldn’t read most of the page no matter how I tried to play with it.  I was hoping for a better copy.  I also knew exactly what Will Book and page I needed based on an index I found on Ancestry.com.

Since the area was just north of the Mason-Dixon line I wondered what the family I was researching’s views were during the Civil War when they lived in the area.  I had a hunch but hunches are useless without a document to back it up so I also wanted to check out if any voter’s records survived.

So, in this complex of one stop, I had 3 missions – a will, deeds and voter’s records.

My necklace did set off security which was odd since it didn’t at the airport.  Next time, no jewelry! When I entered the Recorder’s Office I introduced myself to the clerical worker and ask for directions to secure what I need.

Directed to a computer I was able to pull 5 deeds in 5 minutes.  The printer was a little slow so while it was still printing, I asked about finding the will.

This is not the first time I tried to find the will – I’ve been to the site before and I hired a researcher to also try to find it.  Again, I was told it was lost.  This time, I whipped out my business card and asked to speak with the head of the facility.  I explained to this gracious woman why it was so critical that I find this document and asked if I could go into the basement where the originals were stored as I believed that the will had been misfiled.  She informed me policy prohibited anyone but employees from going into the basement.  I showed her an email I had received from the state archivist that showed, according to their records, the will was located in the basement.  I suggested that the box of wills be brought upstairs and I would go through them to make sure that it wasn’t misfiled.  She agreed and sent an employee to bring up the box.  All 3 of us went through the box and sadly, it was not there.

Had I been allowed in the basement, I would have gone through every box but that wasn’t going to happen as I had pushed it to just have one box brought upstairs.  There is still some hope as the missing document was placed on the “missing list” that a county archivist maintains and if it is discovered, I will be contacted.

The deeds also turned out to not be for the person that I was researching but that’s okay, I have additional information on a related line and the one poor copy I had from the Family History Library microfilm was readable and what I needed.  Two down, one to go!

It was a short walk from one building to the next (and through security again – this time my jewelry didn’t set off the alarm!) to the voter’s registration office.  The clerk told me that by law, only 10 years of records needed to be maintained so none were available for the years I wanted.  She suggested that I go to the historical society as she wasn’t sure when the law was passsed and perhaps, they had older records.  That was my next stop and just around the corner!  Stay tuned…