Originally published on genealogyatheart.blogspot.com on 7 Aug 2016.

I’ve been blogging about my recent genealogical hunt in Pennsylvania.  After packing essential research tools and visiting the County Courthouse I was off to the Franklin County Historical Museum.  Problem was, due to my rental car delay, I arrived later than I anticipated and with only a half hour until closing, I didn’t want to spend the $5.00 research fee and have to return the following day and pay again.  I opted instead to drive about 20 minutes to nearby Waynesboro where the Alexander Hamilton Free Library was open until 7 p.m.

Lucky for me, there was a parking space right in front of the library and I had coins for the meter in my research bag.  Whenever I enter a new library I always ask where the genealogy section is housed if there was no map online.  The sweet librarian pointed to stairs and told me there were “a few rooms.”  More than one, seriously?!  I like that!  The room at the foot of the stairs was awesome, too: 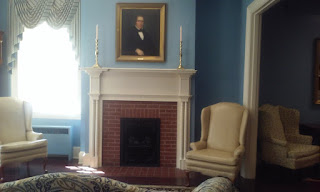 After climbing the stairs I discovered the Civil War room was to the left and the church/cemetery/county histories and genealogies were to the right.  A third, smaller room held file cabinets of clippings and donated genealogy records.

What I found strange was that there was NO staff member or computer to access the holdings upstairs.  It was also extremely HOT.  If there was air conditioning it wasn’t working. (And I’m from Florida so when I say it was hot, it was really hot!)

I quickly walked through the Civil War room.  Although the family I was researching lived in the town during that time and had been affected by the War, the materials were not specific to the area. Several series of volumes were placed on the shelf in mixed up order and my OCD tendencies kicked in – I just wanted to put them in sequence.  Time was a wasting so I moved on to the next room.

I would love to tell you that this room was in better shape but it wasn’t: 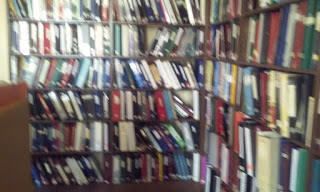 Messy libraries make me nuts!  I decided I would just start at the northwest corner of the room and read the shelves.  By reading, I mean I don’t just read the books that have their names on the spine.  I pull out books that don’t and sure enough, within minutes I found the following: 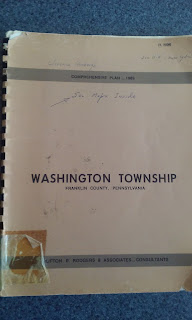 It’s hard to see in the pic due to the small size but the book was once owned and signed by Clarence Harbaugh.  I was researching the Harbaugh family.  Although I wasn’t focused on Clarence I did have him in my tree so I took the book to a nearby table and took a picture with my phone.  Now I had Clarence’s signature so I could add it to media in my tree.  If I ever extend the project I’m working on then I have a good start for another generation!

I had a list of areas I wanted to check – city directories, town records, historical maps and the cemetery and church records I was told were housed there.  I was disappointed to find the oldest City Directory was only from 1905, much too late for my family.  The church records were missing the index.  It was a derivative and I already had the original from the church emailed to me earlier so no loss for me but sad for anyone else who needed that. Since I couldn’t find a burial location for the father of my Generation 1 individual, I really was hoping to locate a cemetery record from a cemetery that no longer exists.  I had been told on the phone twice that the library had the Union Cemetery records but I couldn’t find them.  I did find an 1843 tax list and the folks I was researching were listed so that was a happy dance.

I moved on to the file cabinet room but there was nothing on the family I was researching.  I still had an hour before closing so I went downstairs and asked the librarian where I could find the Union Cemetery records.  She looked on the library holding database but couldn’t find it.  There is a volunteer genealogist but he wasn’t available and staff didn’t know his schedule.  I decided I’d try again the following day as I had emailed twice and left two voice messages but had never gotten in contact with him.  The librarian signed me on to a public computer as a guest since I didn’t have a library card and I happily spent the next hour checking out the remaining newspapers that had been digitized.  Due to the fragile nature of the originals I was only able to view the digitized copies.  Better than nothing!  They aren’t available at Newspapers.com, Chronicling America or Genealogy Bank so it was very important for me to see.  I did find two references to the family I was interested in – jury duty and an advertisement for a sale.  Very nice finds!

The library was supposed to close at 7 but the computers shut down at 6:45.  I was almost done with the newspapers but would have to finish the next day.

Soon after I had eaten dinner and checked into my hotel I checked my laptop to see if my phone’s pictures had synched.  I don’t carry the clunky laptop when I research anymore but I do take it with me on extended trips as it’s easier to manipulate the photos on the laptop then my Kindle, especially when my old eyes are tired after a long day researching.

I save the photos of places to a Word document and place a caption under each so I don’t forget why I took the picture.  I also save pictures of book pages and place the individual pictures in a created folder.  For example, I usually take a picture of 1) the index which I then flag with a stickee, 2) the pages that the index pointed me to and 3) the title page.  Using the stickee helps me flip back and forth from index to the page I’m directed to quickly.  To create the folder to save the pic, I use last name, first name of the individual found and what was the find.  In this case, Weaver.Christin.1843TaxList.  In the folder I place the picture of the index, the title and 2 pages where I found info.  All of the finds are then slipped into another folder labeled with the repository name and date of visit (This would be HamiltonPublicLibrary.WaynesboroPA.14Jul16..  That way, when I get home and merge the pages together to pdf, I can add to media on my tree and note where and when I found the source.  I’m old school and like to cite the location of the find in my notes.