Originally published on genealogyatheart.blogspot.com on 24 Aug 2016.

I’ve been blogging about my recent research trip to Franklin County, Pennsylvania.  My last post told about a cemetery where reinternments of the family I was researching were placed.  I had discovered that the cemetery did not have original records from the first burial site – only derivatives – and that the records that that were available most likely were not accurate as one individual was mentioned in church records but not in the cemetery records.  I was hoping to find the original cemetery records for Union Cemetery so I decided I would drive back to Chambersburg and check out the Franklin County Historical Museum and Library to see what information I could find.

I had tried to make contact via email and phone several times in the past few months with this archive but no one ever returned my query regarding whether or not they had City Directories for Waynesboro from the mid to late 1800’s.

On the way, I passed another cemetery and I recalled that the brother of the family I was researching was buried there.  Hmmm, could this be the final resting place of the parents I was looking for?  I pulled in and made a plan.  The cemetery was small.  Actually, there were two cemeteries adjacent to each other.  The first was very tiny and had a chain link fence around it.  It was close to a brick building that had no name but was too big to be an office.  It was locked.  The second cemetery started on the other side of the chain link and was being mowed by a woman on a riding lawn mower.  She had on head phones so she couldn’t hear me.  There was a second brick building that I assumed was a church.  It, too, was locked.  I could hear someone inside vacuuming.  Besides me, there were only 2 vehicles in the parking lot – a truck with a window open and a car.

I had a copy of the Find-A-Grave page for the family interred so I knew what I was looking for but it didn’t have coordinates.  The family was not on Billion Graves.  I walked to the woman mowing and she stopped to chat.  She told me that the Reverend was in the church and I needed to speak with him for records.  She informed me that she was responsible for mowing the larger cemetery and that the smaller, enclosed one was owned by a different church.  She was not familiar with the markers as she was just hired to cut the grass.  Looking at my Find-A-Grave picture, however, she pointed out that the stones I was looking for most likely were towards the road I had pulled off of as she could see the enclosed cemetery and the building in the background.  Good point!

I went back to the church and knocked again and again but the Reverend could not hear me.  I decided to find the stones and using the hint in the background, quickly gained perspective and found the family.  Some of the stones were unreadable.  My goodness, have stones in this area deteriorated since the memorials were placed online!  I took a lot of pictures.

What I found most interesting were 2 things.  First, the end stone had a family name of Pentz on a large marker.  I have no idea how that family is related to the people buried there.  There were no other Pentz’s in the row, either.  Very weird!  Next odd thing was the empty space that looked like it could hold 3 graves between the Pentz marker and the start of the family I was seeking.  The area looked depressed – no stones – but sunken somewhat.  Hmm.

I went back to the car and took out a notebook. I wrote a brief note to the Reverend, including my name and cell number and requested he contact me about cemetery records for the family.  I had included the couple’s name and dates.  I left the note on the seat of his car because he left the window open!).  On to Chambersburg…

Well, not exactly.  On the way I found another Church of the Brethren and decided to make a detour to ask the office staff if they knew the name of the German Baptist Church that had once been between Waynesboro and Gettysburg.  I wanted this information as the sister of my Generation 1 wife had supposedly been married at that church.  I was hoping to see if I could find a marriage certificate that may firm up where the sister had been born in Maryland as I was stuck on going backwards with that line for my own personal interest.  The office staff had no idea and couldn’t direct me to anyone that might know.  Oh, well. (I have the sister’s death certificate, cemetery record and diary – they all say she was born in Maryland but not specifically where.  No obit or will, either.)

Made it to the museum about 11 AM and got a wonderful parking space outside: 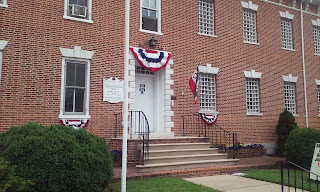 This was the former jail so the door is extremely heavy.  No one around but I saw a sign that showed the library was upstairs.  I was met by a wonderfully kind volunteer who had lived in the area her whole life.  I love finding people like this!  The library was very small – 2 rooms.  She didn’t charge me for research, either, which I greatly appreciate.  She suggested we look in a book of Franklin County Cemetery inscriptions that was written in the 1970’s.  The people I was seeking weren’t listed. I wasn’t surprised, my people are always elusive.  The volunteer was certain that the compiler had done a marvelous job and included everything she had seen.  Perhaps, but it’s the unseen I needed. Like the unreadable grave stone in Green Hill or the possible sunken stones in the second cemetery where I had stopped.

There was no voting records, city directories, educational records, or road orders.  I guess no one had ever asked about road orders – the family had been wagon makers so I thought maybe they also were in charge of the roads.  I have had that happen with another line on Long Island about the same time and thought I’d give it a shot.

We looked at the donated genealogies and although there was some information on related lines, it was nothing new. Actually, it had been lifted from the text that had given me the missing sibling name I was trying to find at the cemetery.  I was going in circles!

She suggested I contact a volunteer librarian at the Chambersburg library who had once worked at the Alexander Hamilton Library for information about the possibility of Union Cemetery records being housed there but not noted in the holdings.  She pointed out the window to the library next door.

Awesome, wouldn’t have to move the car!  Except, the library is closed for renovation and somehow the volunteer didn’t know that.  Walked around the barricades (on the wrong side, of course) and saw the new temporary location address.  Back to the car and gps!

A few minutes later I arrived at the library.  The lady I needed to see wasn’t there.  Big shock, there!  She wouldn’t be back for several days.  I left her a note with my email address.  I also asked for hers and emailed her when I returned home. She never responded.

No one else there had any knowledge of the area’s history.  Time for lunch!

I had 2 half days left in the area and wanted to make the best use of what little there was left to see.  Over lunch, I decided I would go back to Waynesboro and stop at their historical museum, visit any antique stores I might find open and go back to the library to see if the volunteer genealogist had shown up.  I could accomplish all that in the afternoon and would just leave earlier than I had anticipated the following day.  Little did I know what was about to happen!