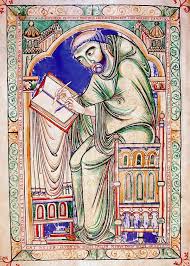 When you were in school, did you ever have an assignment that required you to use a specific text in a library? As an undergrad in psychology, I often had to complete weekly required readings of journal articles. High tailing it to the library was never the issue for me; what was absolutely awful was discovering that the required reading was (gasp!) missing. And by missing I don’t mean that someone was using it, I mean that some mean, no good, very bad person had left the book on the shelf but ripped out the sought after article.

Complaining to the media specialist was fruitless. There staff was as limited then as today, there were no security cameras and few interlibrary loans. Complaining to the professor helped somewhat; he/she often had the needed matierial in their office so you could read it to complete the assignment but you had to sit under their watchful eye and that was nerve wracking.

What frustrated me the most about those experiences was that they were ongoing. The professors never addressed the class to let the self centered individual know that their behavior was abhorrent. The practice was so wide spread at my university that by my senior year the library changed policy and any required reading for our department was removed from the general shelves and held safely behind the reference desk. To view it, the student had to sign their life away and produce a valid photo id.

Today, this would no longer be an issue since most readings can be done electronically. So my unpleasant experiences may have been the end of that diabolical practice.

During the time this was occurring, I can admit that I cursed whoever the individual was that was behind the devious deed. My husband, an economics major, never had this happen to him so he empathized with me. Together, we created verbal curses of the absolutely worst thing that we thought should happen to the perpetrator. From our world perspective at the time, this included horrible happening in the then present, such as having their draft number called, and to the future, as we wished if they ever had children they would go missing. Yes, my coping skills at the time weren’t fully developed but it did help me get through the semesters.

With that background in mind, I was delighted to read a blog post written at Olive Tree Genealogy a few weeks ago about medieval book curses. At first, I thought the curses referred to black magic but that wasn’t the case. Instead, scribes often wrote curses warning individuals who were reading the text of dire consequences if they tore out a page or stole the book. I loved the idea! Granted, this would not have been a viable option for me as society is not quite so superstitious as it once was. Nonetheless, it would make someone think twice before they made a bad choice.

Here’s an example from a Bible scribed in 1172 with the transcription below: 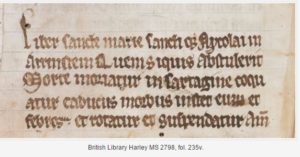 “If anyone take away this book, let him die the death; let him be fried in a pan; let the falling sickness and fever seize him; let him be broken on the wheel, and hanged. Amen.”1

Since reading that blog story I’ve done some more research into the topic. Evidently, the practice was begun long before Medieval times; ancient Greek and Babylonian scribes had recorded threats of their own.

It is understandable why a curse threat was added as back in the day, it took months to hand copy a book. It was painstaking work and the text could be destroyed easily from spilled ink or getting to close to the candle flame.

Hubby thinks we ought to put the practice to use today by adding them to our writing. He came up with:

He who forwards this article for others to see
I only ask that you quoth me
Thieves and pirates be forewarned
Your actions will be duly scorned
Copyright law is the real deal
Designed to address what others try to steal!