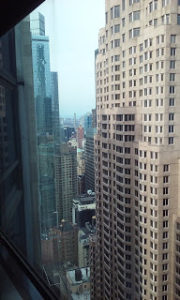 I’ve just returned from attending an awesome conference in New York City. I love New York, no matter what season I visit! Usually I think about my husband’s lines that were residents there during the New Netherland years but not this time.
Perhaps due to the current political climate and the fact that one of my colleagues couldn’t travel with us as she was taking her U.S. citizenship exam, I instead thought about a family emigration story on my maternal side.
My great grandmother, Anna Grdenic Kos, arrived in the U.S. with two of her surviving children, my grandmother, Mary, and my Great Uncle Joseph, on 16 July 1913[1].
Anna’s husband, Joseph Sr., had come earlier, on 10 January 1910, to establish himself in America[2]. He was employed by the Pullman Company in Chicago after leaving the military life as a cavalry officer behind him in what was then Austria-Hungary.
Anna was raised as a country girl; a farmer’s daughter who was shy and thoughtful. Anna never spoke about the boat passage; all that I know about the trip was from the recollection of daughter Mary who, as a pre-teen, felt it was her duty to entertain the other passengers with her operatic voice. Personally, having been raised in a household with both Anna and Mary, I also believe the underlying reason was that Mary hoped for fame and fortune in the new world and when she received praise and cash for her songs, she, like many immigrants, seized an opportunity.
Joseph Sr. had traveled from Chicago to meet his family upon their arrival. Knowing the trip was long, he arranged for an overnight stay in a hotel in New York City prior to the family departure via train to their final destination, a Pullman owned apartment in Chicago.
I’d love to know exactly where the family slept on their one night stay in New York City. I do know it had a wonderful bathtub that Mary appreciated.
Anna and the children had never been in such a great city and although Mary was disappointed the streets truly weren’t paved with gold, Anna fell in love with the array of merchandise in store windows. So last Sunday, as I walked down 34th Street and window shopped, I tried to imagine the shock and awe Anna and Mary experienced as they took in the wonderful sights. Having just learned that her new apartment came with electricity, Anna fell in love with a lamp she saw in a storefront. Joseph Sr. informed Anna that the delicate lamp would not survive the long journey ahead. Disappointed, Anna swore one day she would own one. A few weeks later, Joseph purchased the lamp at Marshall Fields in Chicago. The treasured lamp still remains in the family:

I’ve always wondered the name of the store where Anna first spotted the lamp. Mary could only recall that the shop had clothes that she was much more interested in than a lamp. My guess is it was either Macy’s or Bloomingdale’s.
The family and the lamp continued to stay in Pullman housing in Chicago until the spring of 1919. The photo below was taken shortly before they moved to Gary, Indiana; Mary had wed and her husband, John, along with her father, Joseph, had found new jobs at U.S. Steel.


The lamp survived that relocation and several others. It’s light has shown over 5 generations of owners and hopefully will continue for many generations to come.
When I see the Statue of Liberty’s lamp I am reminded of my family’s journey and the story of our very own lamp. Each time I turn on the light I think of the words of Martin Luther King, “Darkness cannot drive out darkness; only light can do that. Hate cannot drive out hate; only love can do that.” It is a message appropriate for today and well worth remembering. That little light of mine connects me to my ancestor’s past – the good, the bad, the ugly – and gives me hope and strength for whatever the future might hold.
This Little Light of Mine