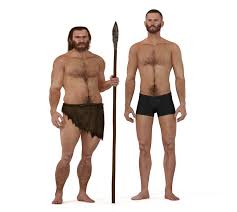 Last time I blogged about my son’s autosomal dna results being returned so quickly from Ancestry. Minutes after I finished that blog, 23andMe sent me an email that my results were back. We’re still waiting for hubby’s results from 23andMe. All three kits were mailed at the exact same time. I’m not complaining about 23andMe, my results were returned 2 weeks to the day they received them and the original information said results would be back in 4-6 weeks.

Like me son, there was no startling surprises. Instead, it confirmed that I have quite a bit of neanderthal dna which my mom swore we did. I gasped when I saw the numbers. Don’t you hate it when your parents were right?! I wish my mom was alive to see those findings. When I told hubby he was stunned. “How did your mom know that?” he asked. She was always fascinated with them and read anything she could. Back in the day, the thought was there was none of their dna surviving. I would tell my mom that and she would counter that science will find out the truth. Geez! I always thought my mom was interested because most of the excavated sites were in northern Croatia where her parents had been born. She also swore her slightly extended jaw was a carry over from them. Now I have a cave visit on my bucket list.

The rest of the results were exactly as I had expected. Lots of French/German and Eastern European. Those early Persian-Greek roots show up supporting my grandmother’s stories and my grandfather’s gypsy heritage also is visible. I’m so glad I listened when they told those tales. I admit I didn’t believe them 100% in my youth. Seriously, how many families could pass down stories from 2000 years ago but they proved to be correct.

Since I’m an only child and there are no males that could test on my father’s line for 3 generations back, I never had any results on his side. The autosomal gave me that. It’s a no brainer to figure out from where my Great Britain, Scandinavian and French/German was received.

I’m not greatly impressed with 23andMe’s connections to other test takers. I preferred Ancestry’s which shows clearly if another tester had uploaded a tree, how many were in the tree, if the tree was private or public and if a match from my uploaded tree to another tester was found via a shaky leaf. I discovered that most of 23andMe’s matches to myself were recorded as Anonymous and were so old that they don’t even use the site any longer. There was really no one to share a tree with as all were 3-4 or more cousins apart from me. Since I tested my son through Ancestry I could use that feature to make connections which I did.

I created a database in Excel and made the following headings:
Message to
Common Ancestor
Descended Through (this is where the other person was descended and not me)
Date (I sent the email)
Relationship Estimate (such as 3-4 cousin)
Comments (if no tree, how I deduced where the relationship was)

I sent out 50 brief emails to relatives and recorded who I sent a message to on the database. Within 12 hours I’d heard from 25%. I’ve heard complaints that Ancestry’s system is useless since many people do not upload a tree or have a minimal one, at best. I didn’t find this to be a problem for me as I have a very large tree and recognized many unique surnames. Of the first 50 cousins given, only 3 do I not find a connection. Two of the 3 wrote back immediately and we’re exploring relationships now. I could see how this would be a problem if someone was adopted and had no parental knowledge. On a side note, I attended a training in the past week where the presenter made a catty remark about large trees. The trainer felt it was a “waste of time accumulating people.” I agree just trying to collect names isn’t productive but if a surname study was done with citations to prove relationship then accumulating the data is beneficial to making connections.

The coolest thing about my results was reconnecting with people who have emailed me over the last 22 years since I first posted a public tree online. My 4th cousin on the Bollenbacher line and my 3rd cousin on the Leininger side had tested and sure enough, we’re related exactly how we thought. They made those predictions 10 years ago. It’s nice to know that the paper trail matched the science.

The 23andMe result interpretation again mentions Marie Antoinette as my old Ancestry mtDNA had mentioned years ago. Not relevant to me but does correlate with the other test. The new results added Copernicus in the same haplogroup. My son liked that. Since I’m now working in a STEM school I thought that was appropriate.

Now we wait for hubby’s results. In the meantime, I uploaded my raw data to FTDNA and MyHeritage. I’m going to upload my sons and my results to gedmatch, too. Stay tuned.