Originally published on genealogyatheart.blogspot.com on 25 Nov 2015.

Disclosure: Genealogy At Heart may receive a small amount of compensation if you choose to purchase products via some of the links below.  Opinions expressed are my own and all products listed are what  I recommend for my personal use.

In honor of Thanksgiving, I’m thinking about Native Americans.

My husband loves to go garage sailing and just discovered a children’s book published by Lyons & Carnahan in 1924 titled Why We Celebrate Our Holidays by Mary I. Curtis.  Looking through it I was astounded at the number of holidays that are no longer celebrated, such as Bird Day, Forefathers’ Day and American Indian Day: 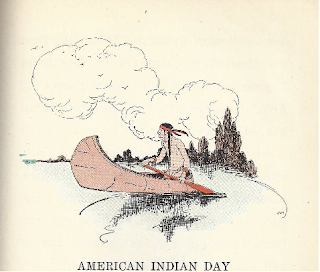 Evidently, American Indian Day was the brainchild of the Society of American Indians who proclaimed on 25 September 1915 the purpose was to strengthen the fellowship bond between “the red men and the white.” p. 73.  The New York governor agreed and the first holiday was celebrated the 2nd Saturday in May.  Other states soon followed but the date chosen varied.  The book does not say how the holiday was celebrated.

I’m not sure when most states discontinued the holiday but I never heard of it.  November is deemed Native American month in my area so maybe it morphed into that.  I met a Seminole Native American reenactor of Abiaka “Sam Jones” at one of my school sites for Great American Teach In last week: 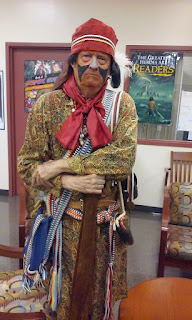 We spoke about the the lens people have on historical events.

This got me thinking about changes in word usage and how we need to remember what once was acceptable might no longer be. We no longer say “Indians” as its not only inaccurate, it’s offensive.   Fifty years ago, as a Brownie Girl Scout, I learned the following song with hand motions at Camp Meadowbrook:

and don’t mind it.

The person who taught us that little ditty was a Native American, supposedly one of the last of the Potawatomi tribe:

I loved anything Native American because I believed I was genetically related.  My mother told me that my father had told her that there was Native American ancestry in his past.  I looked Native American by skin tone, eyes and hair.  I decided I must be Potawatomi because that tribe resided where my father’s family farmed.  Years ago, my husband even had a bust made of a Potawatomi chief as a visual reminder to me that I would one day discover that unknown lineage.

Then, dna became inexpensively available and I discovered I had NO Native American ancestry.  So why did my dad think he did?

Climbing the family tree instead of hills uncovered what I think was the root of the story.

My dad was Orlo Guy Leininger.  His great great grandfather, Jean “John” arrived in America in 1827.  There were several other Leininger branches that had come to the U.S. before and after John’s line.  Although we haven’t identified who the original Leininger was, tests on several of the males from varying branches show that there was one Leininger ancestor from the Bas Rhin region of what was then owned by Germany.

The earliest Leininger emigrants settled in Pennsylvania and later ones, like my line, in Ohio.  With large families and limited land the families moved farther west.  While I was growing up there was another Leininger family in the same locality where my father lived.  He had no knowledge (and neither did they) of how they were related.  Their gateway ancestor first settled in Pennsylvania and that is where I believe the mistaken tale of Native American ancestry began.

Sebastian Leininger immigrated in 1748 to Pennsylvania with his wife and four children.  The family farmed on the then farthest western boundary in the new world.  One day, Sebastian’s wife and oldest son, Johan Conrad, took the wagon to town.  Sebastian remained on the farm with his youngest son and his two daughters, Regina and Barbara.  A culture clash was arising in the area between the French, British, German and Native Americans.  A band of Native Americans attacked several homesteads that day.  The Leininger cabin was one of those targeted.  Sebastian and his son were killed while daughters Barbara and Regina were taken as captives. The girls were separated and moved into the Ohio valley where they remained for a number of years.

There are two young adult books available that tell the story in more detail.  Interestingly, they are written with the point of view from different sisters – I Am Regina (Leininger) and Alone, Yet Not Alone is Barbara Leininger’s story. The last book was also made into a movie with limited release in 2013 and an Academy Award controversy over the title song – Alone, Yet Not Alone [Accompaniment/Performance Track] (Daywind Soundtracks Contemporary)

I believe the Leininger abductions became twisted in the retelling and that was why my father thought the Leininger family was Native American.

Want to know if you have Native American ancestry?  Check out Genealogy Today’s recent blog 5 Clues You May Have American Indian Ancestry.

Wishing you a wonderful Thanksgiving!