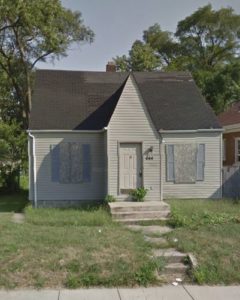 Every October I like to blog about a family story passed down to me that I consider spooky. The odd thing about the story I’m about to tell is that I can find NO DOCUMENTATION to support the facts. Zero – Nada – Zilch! Since this occurred in my lifetime I find the lack of proof frustrating and a little strange. You’ll see why at the end of the tale.

I come from a large extended family on my maternal side. My grandmother, Mary Kos Koss, was the family matriarch who loved to entertain which greatly contributed to people keeping in close contact with each other. After her death on 5 Jun 1985, the relatives, for the most part, lost touch with each other. I witnessed the retelling of this story in the presence of my mother and grandmother from the individual it happened to and they are all now deceased. One of my aunts also had knowledge of the event, along with two of my cousins. My aunt is deceased and I have lost touch with my two cousins.

Here’s what I recall…

On school days as a child, I awoke every morning at 7 AM so that I wouldn’t be tardy to school which began at 8 AM. I lived a block from my elementary school and about 6 blocks from my high school so the walk was quick unless the snow was deep. During my late middle and high school years, my mother worked a few blocks from our home and also had to be at work at 8 AM. She liked to listen to the radio and catch the 7 AM news report that included the weather report because weather was fickle in our area; a warm morning could change to snow dusting by afternoon.

While mom was listening to the radio in her bedroom I was getting dressed in mine. I heard her shriek and I quickly came out to find out what was the matter. She was running down the stairs to the first floor, something I rarely witnessed, so I ran after her. My grandmother was in the kitchen enjoying a cup of coffee and toast. Mom ordered my grandmother to turn on the kitchen radio. Mom never ordered anyone to do anything so this was strange, indeed.

Grandma got up from the table and turned the radio on but all that played was big band music. My mother reached over and changed channels but my mom couldn’t find whatever she was looking for. After stopping at several stations she turned the dial off and told my grandmother that the news reported that there had been a plane crash at the home of George Kos. My grandmother paled.

George was my grandmother’s only son. He lived a short distance from us in a small home he had purchased after his second divorce. At the time, Uncle George worked for US Steel as a laborer. As was typical, his work schedule varied; days, nights or midnights as the three shifts were commonly called. We didn’t know what shift he had been assigned so we didn’t know if he had been in the house when the plane hit.

Grandma immediately dialed his landline phone number but it was out of service. I suggested we call the news room for further information. While I looked up the number in the phone book, my grandmother tried to reach another of her daughters who lived in the area. No one answered. My mother called the radio station but no one answered, probably because the office didn’t open until 8 AM. My grandmother then called the police station; she was informed that there was no information to disclose. I remember thinking we should call the hospitals but I kept that thought to myself. Grandma called my aunt again and still there was no answer. It was now about 7:25 AM and the adults decided they would drive to George’s home to see if he was there. My mother told me to get my shoes on and as we were heading out the door, the phone rang. My aunt told my grandmother they had just been awoken by the phone and figured we had called. George was safe and had slept the night at her house.

I was glad Uncle George was fine but certainly disappointed I had to go to school that day. My aunt told my grandmother George was going to sleep in and meet with the insurance agent that afternoon but they’d all be over for dinner that evening.

Over dinner that night, Uncle George said he after he had gotten home from the day shift, he showered and turned the television on. He had fallen asleep in the living room and was dreaming that his grandmother, Anna Grdenic Kos, was shaking him. Anna had died on 14 Feb 1966 and had doted on George in his youth. Granny, as we called her, was whispering in his ear and shaking him to get up and get out of the house right away. In his dream, George told Granny he was tired and needed to sleep but she was insistent that he rise and leave. He awoke, startled. The dream had seemed so real. As he sat in the armchair, he could still hear her voice in his head telling him to go now. He arose, grabbed his truck keys and wallet and decided he needed a drink at the local bar. He was there when the plane crashed into his home. The living room had been destroyed. He believed Granny had saved his life. We all believed it, too.

I’m foggy about the exact time period the event occurred. It happened after Granny’s death in early 1966 and before I met my husband in 1972. A cousin had lived in George’s home after her marriage and at the time of my grandfather’s death in 1970 as I stayed with her while my grandfather was dying. I don’t recall my grandfather being at the dinner table when Uncle George told us his dream so I’m inclined to think this happened in 1971 or early 1972 as my cousin had relocated from the area and George would have returned to the house. But if Gramps had been there, it could have occurred between 1967-1969.

Now here’s the frustrating part with the records. We used to get the local newspaper, the Gary [Indiana] Post Tribune but I don’t recall an article about the crash. My family were newspaper clippers so I would think I would have inherited the story but I have not. Sometime during this time period, we did purchase the Chicago Tribune instead so that could be why I don’t have a clipping. I wanted to check the Gary Post but those years are not online. The newspaper had changed ownership and those years are missing. The local library has been closed due to funding cuts. On to the next record –

I know my Uncle’s address as I do have a US Public Records Index from 1987 listing it. (The house was rebuilt and he continued to live there until he retired and moved from the area.) I tried to search property records but the city claims they have given the records to the county who claims the city did not do so. I was hoping the property records could show when my uncle purchased it to narrow the earlier dates and possibly, to show when permits were pulled to rebuild. Onward with the search –

I have no relatives to help me recall the dates further. Next –

Could not find the event online, although there are several websites that record plane crashes in Indiana. Some do not go back into the 1970’s; those that do have missed it.

Trying to think outside the box, I thought of possibly contacting the present owners but the street view of Google from 2013 (above) shows the house was abandoned. The living room was the front window on the right.

For now, I have no proof of the event. As the only surviving witness to the story, I wanted to record it. Perhaps someday the missing records and newspaper story will surface to add support to the my tale. Even if documents are never found, I will continue to take heed of dreams involving my ancestors. I just wish they’d tell me the winning lottery numbers!